On arrival meet at the airport with our representative then transfer to the hotel. Overnight at hotel.

Morning after breakfast drive to Jaipur, on arrival check in at the hotel. In the afternoon city sightseeing tour of the Pink city visit, including City Palace, Hawa Mahal Palace of winds, natural observatory. Overnight at hotel. 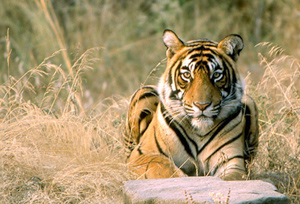 Morning after breakfast drive to Ranthambore national park, on arrival check in at the wildlife resort. In the afternoon safari to the national park. Overnight stay at resort.

North & Central India Tiger Tour, Ranthambore Tiger Reserve, at the junction of the Aravalis and the Vindhyas, is a unique example of natural and historical richness, standing out conspicuously in the vast, arid and denuded tract of eastern Rajasthan, Tiger, at the apex of the food chain, lord over the kingdom in a subtle way. Solitary by nature, it operates in stealth. Therefore tiger sightings, frequent as they are, always a matter of chance. However, even evidences of tiger’s activities are very exciting. The other kinds of cats found in Ranthambore are Leopard (Panthera pardus), Caracal (Felis caracal), Leopard Cat (Felis bengalensis), Fishing Cat (Felis viverrina) and the Jungle Cat (Felis chaus). Besides the big cats, the other large predators found in Ranthambore include Sloth Bear, Striped Hyena, Wolf, Wild dog (or Dhole), Jackal, Indian Fox, Palm Civet, Small Indian Civet, Common Indian Mongoose, Small Indian Mongoose, Ratel (or Honey Badger), Marsh Crocodile and the Indian Python. There are two species of Antlers, namely the Spotted Deer (or Chital) and the sambar Deer, and, two kinds of Antelopes, namely the Indian Gazelle (or Chinkara) and the Blue Bull (or Nilgai).

Birds In Ranthambore – Ranthambore has over 330 species of birds and we are still counting. A keen birder can easily net over 120 species. For birders, Ranthambore’s specialties are the Indian courser, Painted spurfowl, Indian skimmer, quails, larks, pipits and prinias. One can have the beautiful birds from following spot like Surwal Lake, Mansarovar Lake, Misradhara gate, Amlidih on the Banas river. 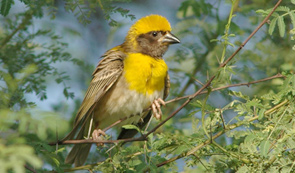 Morning after breakfast drive to Bharatpur Bird Sanctuary, on arrival check in at the hotel. Afternoon free to have a rickshaw ride to the bird sanctuary. Overnight at hotel.

Flora in Bharatpur: More than 300 species of birds are found in this small wildlife park of 29-sq-kms of which 11-sq-kms are marshes and the rest scrubland and grassland. Keoladeo, the name derives from an ancient Hindu temple, devoted to Lord Shiva, which stands at the centre of the park. ‘Ghana’ means dense, referring to the thick forest, which used to cover the area.

Major Wildlife Attractions: The major attractions of tourists visiting the park are the numerous migratory birds, who come from as far away as Siberia and Central Asia and spend their winters in Bharatpur, before returning to their breeding grounds. Migratory birds at Bharatpur bird sanctuary include, several species of Cranes, Pelicans, Geese, Ducks, Eagles, Hawks, Shanks, Stints, Wagtails, Warblers, Wheatears, Flycatchers, Buntings, Larks and Pipits, etc.

Morning after breakfast drive to Agra, on arrival visit the world famous Taj Mahal. In the afternoon transfer to the railway station to board train for Umaria. Overnight on board.

On arrival at the station transfer to the Bandhavgarh National Park and check in at the wildlife resort. In the afternoon Safari to the national park. Overnight at hotel. 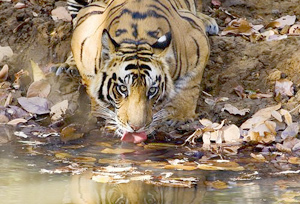 Bandhavgarh National Park was the former hunting preserve of the Maharaja of Rewa and at present is a famous natural hub for White Tigers. White Tigers, now a major attraction around the world’s zoos, were first discovered in Rewa, not far from here. The terrain is broken, with rocky hill ranges, running roughly east west, interspersed with grassy swamps and forested valleys. Bandhavgarh National Park is one of the finest national park in the India and has the distinction of harboring the highest concentration of tigers per unit area of forest. The Bandhavgarh National Park is spread over on area of 448 sq km with a cross area of 105 sq km. At the center of the park is the bandhavgarh hill, rising 811 meters above sea level and surrounding it are a sloping valleys, These valleys end in small, swampy meadows locally known as “bohera”. Bandhavgarh was declared a national park in 1968. Since then many steps have been taken to retain Bandhavgarh National Park as an unspoilt national habitat for a variety of wildlife peculiar to the area. These includes gaur (Indian bison), sloth bear, leopard, porcupine, wild boar, sambar and spotted deer, among others and of course, the tiger.

Morning after breakfast drive to Kanha National park, on arrival check in at the resort. Overnight at resort. 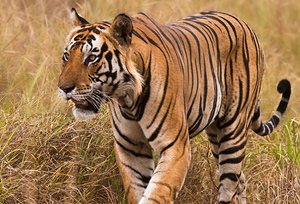 Kanha National Park : Kanha’s sal and bamboo forests, rolling grasslands and meandering streams stretch over 940 sq km in dramatic natural splendor. This is original Kipling country, of which he wrote so vividly in his Jungle Book. The same abundance of wildlife species exists today in Kanha National Park, which forms the core of the Kanha Tiger Reserve created in 1974 under Project Tiger. The park is the only habitat of the rare hardground barasingha (Cervus Duvaceli Branderi). In the 1930s, the Kanha area was divided into two sanctuaries: Hallon and Banjar, of 250 sq km and 300 sq km each. Though one of these was subsequently disbanded, the area remained a protected one until 1947. Depletion of the tiger population in the years that followed led to the area being made an absolute sanctuary in 1952. By a special statute in 1955, Kanha National Park came into being. Since then, a series of stringent conservation programmes for the protection of the park’s flora and fauna has given Kanha its deserved reputation for being one of the finest and best administered National Parks in Asia, an irresistible attraction for all wildlife lovers and a true haven for its animal and avian population.

Forest Department guides accompany visitors around the park on mapped-out circuits which enable viewers to see a good cross-section of Kanha’s wildlife. The best areas are the meadows around Kanha, where blackbuck, chital and barasingha can be seen throughout the day.

Mammalian Species: Kanha has some 22 species of mammals. Those most easily spotted are the striped palm squirrel, common langur, jackal, wild pig, chital or spotted deer, barasingha or swamp deer, sambar and blackbuck.

Avian Species: Kanha has some 200 species of birds. Watchers should station themselves in the hills, where the mixed and bamboo forests harbor many species, and in the grassy forest clearings. Water birds can be seen near the park’s many rivulets and at Sarvantal, a pool that is frequented by wafer birds and the area in front of the museum. The sal forests do not normally yield a sight of Kanha’s avifauna. Early mornings and late afternoons are best for bird watching; binoculars are an invaluable aid to the watcher.

Morning after breakfast drive to Nagpur airport to board flight for Delhi. On arrival meet at the airport and transfer to the hotel. Overnight at hotel. 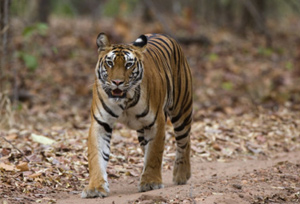 Jim Corbett National Park is located in the state of Uttarakhand. The national park lies in the foothills of the Himalayas within the districts of Nainital, pauri Garhwal, Almora, Bijnore. Corbett Tiger reserve covers an area of about 1318.54 sq. km. including 520 sq. km. of core area and 797.72 sq. km. of buffer area. The core area forms the Jim Corbett National Park while the buffer contains reserve forests (496.54 sq.km.) as well as the Sonanadi Wildlife Sanctuary (301.18 sq.km.)

Major Wildlife Attractions: Jim Corbett National Park India is a haven for Tigers as well as its prey, which include four kinds of Deer, Wild Boar and some lesser-known animals. Leopards are mostly found in the hilly areas of the Corbett park. Some nocturnal cats found here are the Leopard Cat, Jungle Cat and Fishing Cat. Sloth Bear is found in the lower regions of the park while the Himalayan Black Bear is seen in the higher hills only. The Dole or Wild Dog, though they can be seen in the southern areas of the park along with the Jackal. Some of the smaller residents of the park are Himalayan Palm Civet, Indian Gray Mongoose, Common Otter, Black Naped Hare and Porcupine. Elephants are among one of the main attractions of Jim Corbett Park. Along the Ramganga River shores, one can spot the long-snouted, fish-eating Gharial Crocodile and the ‘Mugger’ Crocodile. Also seen on the rocky hillsides is the Ghoral or Goat Antelopes. The Langur and Rhesus Monkeys are well distributed throughout the Jim corbett national park and warning the whole Jungle with alarm calls when they see either a Tiger or Leopard from tree-top perches.

Morning and afternoon game drive to the national park. Rest of the day free at leisure. Overnight at resort.

Morning game drive to the national park, after breakfast at the resort drive to Delhi. On arrival check in at the hotel. Overnight at hotel.

Morning after breakfast full day city sightseeing tour program of Old and New Delhi. Late in the afternoon transfer to the international airport to board flight for onward destination.

There are no reviews yet.